I spent three years at the Polytechnic for a paper to show that I also learnt how to draw de-oxygenated blood from the veins and conduct some experiments in the laboratory. After three years of grueling academic work, I left with nothing to show for my stay on campus. It is a moment in my life that I wish no one will ever experience. The experience is spirit-sapping and unpleasant. It is not palatable at all. However, I take consolation from something precious.

I take consolation from the experiences I had that I wish I could have again. And sometimes like the musically-versatile R.Kelly, I wish I could turn back the hands of time to relish again, all those wonderful moments that have fused into my personality. We all know how impossible that is. Interestingly they have become thoughts or better still collection of memories. And the legendary Bob Marley already stated that “the good times of today are the sad thoughts of tomorrow.” So I will have to cope with that sadness.

I recall many things. How I was not able to go past a vetting committee I lobbied to constitute, as a sole contender for the Public Relations Officer of my Department. How I used a word and a whole Rector instructed the class to go check the word because he doubts the existence of the word “bereft”. How I did many things that cannot be captured in this piece.

One memorable one is the Knowing Africa quiz organized by TV Africa. The interview I granted the television station about the final contest was used as advertisement for the reputable programme for almost a year.  We were locked up in the finals against a formidable team and numerous supporters of Ghana Institute of Journalism in the studios one fine Saturday afternoon. I must confess they dragged us on the floor in performance at the earlier stages of the contest. We gathered steam getting to the tail-end and that was when hell broke loose. Together with a brother, our jubilation was wildly ecstatic and irritating to our competitors. At a point in time in the programme, we had to be suspended from the studios.  But did we care? We were savoring the fact that we had overcome that ‘oppression’ the GIJ students placed us under. On a more serious note, we were appreciating knowledge, the sole good.

My point was succinctly captured by one of the contestants for Makerere University, Lamech Mbangaye, a semi-finalist in the 2010 Zain Africa Challenge won by Egherton University of Kenya. When the smiling John Sibi-Okumu, the quiz master  asked him what his impression about the contest was he replied that the contest made him realize how knowledge can be “incredibly fun and intensely competitive.”

And that was the feeling when Nima “2” JHS walked the bragful talk of their headmaster by shoving away the stiff and tight competition from the fifteen other schools that partook in the Zongo Inspirational Team Ayawaso East Schools Quiz Contest. 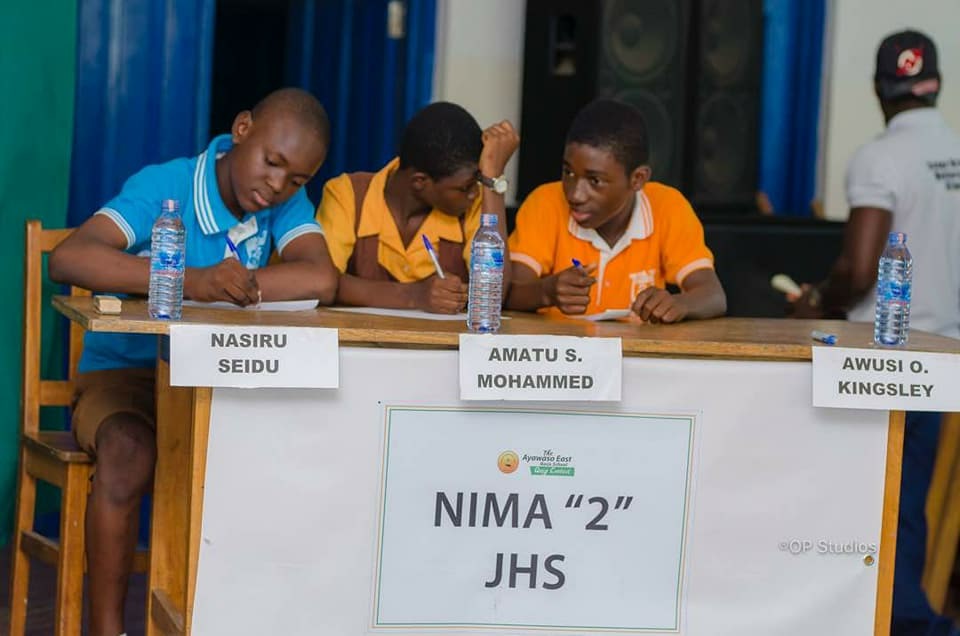 When the Zongo Inspirational Team, the organizers of the quiz contest called on the Headmaster of Nima “ 2” JHS to invite his school, he hit his chest like the proverbial lizard that jumped from the high Iroko tree and stated that his school is going to walk away with the ultimate price. And they did it massively by showing their counterparts from Ring Road East JHS the difference between Density and Destiny in the final contest.

The final which came off last Thursday at the Kathy Knowles Library in Nima-Maamobi was an adrenalin-filling experience as our young ones battled it out profoundly by showing the content of their skull. It attracted a lot of students and saw some of the community-activists thronging the venue to solidarize with the organizers for such a wonderful and much-needed program. It also saw the Zongo Youth Chief come there in his full capacity as the man that is galvanizing the youth front. He did not only come but came very well by supporting the quiz mistress with her team and teachers available with something small to give them a shot in the arm.

The quiz started with sixteen schools that went through preliminary stages with the winner of each contest moving to the quarter finals. Eight teams contended in the quarter finals and it was finally cut down to the semi-finals, thereafter the final contest between Nima ‘2’ JHS and Ring Road. All the contests were held at the conference room of the Nima-Maamobi library (Kathy Knowles Library).         All the schools can be found in the Ayawaso East Constituency except Al-Falah JHS which can be located in the Ayawaso North Constituency.

The confidence of the contestants kept increasing as the days of the event unfolded. One could realize intense maturity in the children in the final contest when juxtaposed with the opening contest. That means the children grew on the job. This could be translated into the fact that when such care, intensive atmosphere of urgency is created in the children, they will do marvelously well far beyond how they used to fare in the previous Basic Education Certificate Examinations. According to the President of Zongo Inspirational Team, they would monitor the performance of the pupils to ascertain the level of impact of the quiz on them. All the schools that featured in the contest were presented with a certificate and the contestants with some awards to uplift their spirits. 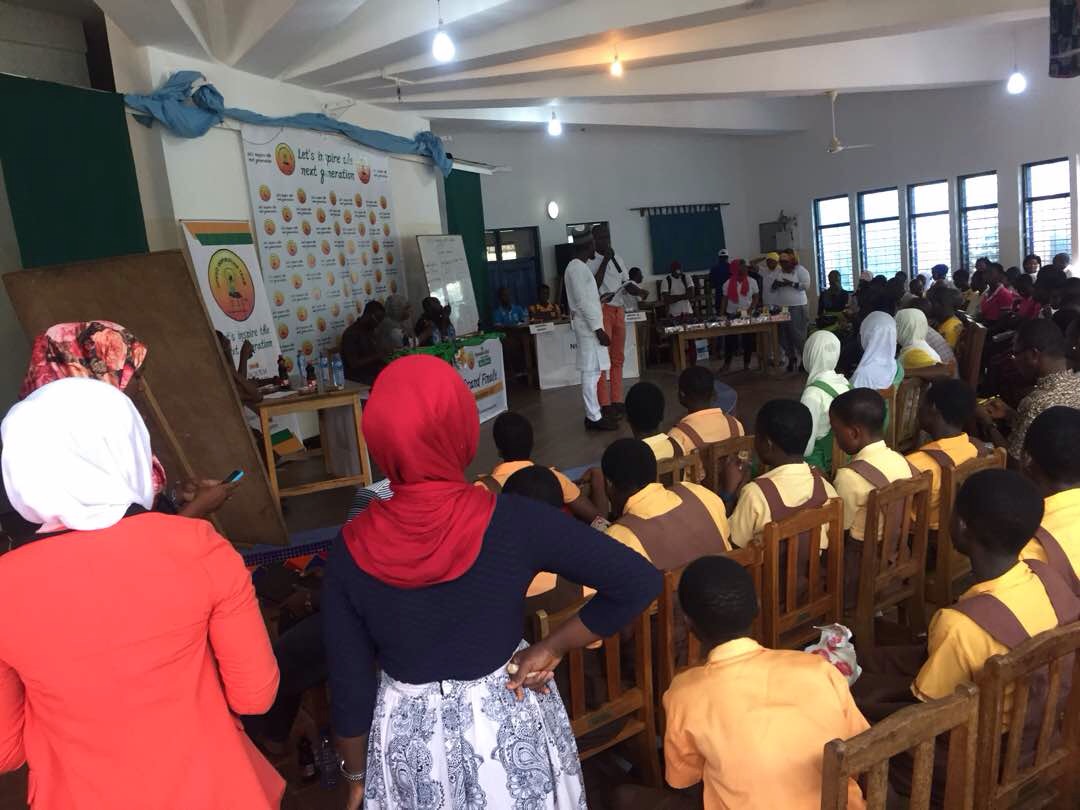 The thought that brought forth this wonderful initiative is success in itself. And the massive realization of it in a grand style and fashion is a feather in the cap of the organizers. Indeed, they have lived up to the billing of been an inspirational team. That is the most profound thing any organization could do the young ones who find themselves in a seemingly hopeless community. A community where the first thing a child could see early morning is someone smoking in the open, an old-young man recovering his senses from a drunken stupor. The organization has really proven what leadership is all about; to offer hope and future to the young ones. Through their actions they have reiterated Desmond Tutu’s definition of hope as “being able to see that there is light despite all of the darkness. Like what a good teacher does, Zongo Inspirational Team inspired hope, ignited the imagination, and instilled a love of learning in the young ones.
Much more significantly, they have shown the children that despite the discomfiting community in which they find themselves, “there is some good in this world, and it’s worth fighting for.”

We have no words to describe aptly how we feel about their wonderful gesture. Neither do we have the words to convey our profound gratitude. We just repeat what the late American footballer and coach, Vince Lombardi stated that “It is time for us all to stand and cheer for the doer, the achiever — the one who recognizes the challenge and does something about it.”

Left to me alone, the final contest should have been staged on the Nima Highway, the heart of town so that all and sundry can see. I believe we should not always leave the streets for what I term ‘forces of evil’ to be holding their iniquitous programmes. These activities of theirs shape the minds, hearts and lives of our young ones because the sight they see is the sight they behold. We can’t leave the streets for hoodlums to be staging gambling sessions with equally obscene music spurring them. We can’t leave the streets for our wayward ladies to turn up the area in a dance session with wild, lewd dance and lyndi hops that are offensive by accepted standards of morality and decency.                    We must stage such wonderful and community-impactful programmes in the streets to re-orient our young ones. We can’t always be staging them at the outskirts of town. We must lead the charge in shaping the minds and hearts of the indigenes by making them behold the beauty of knowledge and the honor in brain development.

Another issue is the complete absence of our politicians during the entire four weeks of the contest. The organization, Zongo Inspirational Team needed nothing from the politicians. As a matter of fact, they have always run successful programmes on their own. The little our politicians could do was to come offer hope to the young ones. A thing as simplistic as a handshake from the Member of Parliament could ignite an inferno of motivation into any of the young ones from the partaking schools. This singular act could be the ambrosia for the young ones to resolve to learn hard and reach higher heights.  Unfortunately, we saw none of our duty bearers there. Not even a Unit Committee Member showed his face. No Assembly man not to even talk about our Members of Parliament.

Our Members of Parliament have consistently shown that they are not profoundly interested in the Educational programmes of the community. They are rather interested in mundane activities. Once upon a time, a Member of Parliament appeared on a Dancehall stage to the surprise and chagrin of the youth in town. Few weeks ago, a young man noted for thuggery in the community got married. He staged a football gala to commemorate that wonderful stage in his life. I saw our two Members of Parliament (Ayawaso East and North) at the finals of the gala.  Sources informed me that they also appeared at his Marriage reception at Kotobabi Wembley and also at the mosque where the knot was tied.               Yet they could not appear for even a microsecond to ‘support’ an organization that is executing part of their mandate for them.

It is very serious. To me I believe there is a tacit approval of thuggery by both high officers. It does not portend well for the development and world outlook of our young ones. It is very serious because by dint of their position, they are our leaders and as Chinua Achebe wrote in his Trouble with Nigeria, “leaders are in the language of psychologists, role models. People look up to them and copy their actions, behavior and even mannerisms. Therefore if a leader lacks discipline the effect is apt to spread automatically down to his followers. The less discerning among these (I.e. the cart majority will accept his action quite simply as “the done thing,” while the more critical may worry about it for a while and then settle the matter by telling themselves that the normal rules of social  behavior need not apply to those in power.”

We can’t allow that to even mar the fact that Zongo Inspirational Team did a yeoman’s job. We the people of Nima will forever offer our thanks because “gratitude is a continuous attitude, not an occasional incident.”

To Nima ‘2’ JHS, we say Congratulations to them. Their performance is what the Latin term  tour de force, a remarkable achievement.

Inusah Mohammed
[email protected]
NB: The Writer is a Youth-Activist and a Student of Knowledge.

PALESTINE IS STILL AN ISSUE: 13 THINGS YOU MUST KNOW ABOUT THE PALESTINIAN-ISRAELI CONFLICT